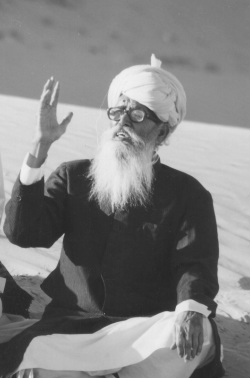 Late Ustad Rana Khan was born in the beginning of 1920 in the heart of the desert in Rajasthan. He has been part of a small community of  hereditary minstrels from the Thar Desert, singers who keep alive an oral tradition that goes back to medieval times. Born and brought up in a traditional musician family, music has been an important part of his life since his childhood. Trained by his father and uncle, Rana Khan developed his vocal skills and mastered a wide repertoire of the traditional Manganiyar songs.

For many years, he had to manage a life, far away from the big cities and auditoriums, practicing his vocal skills and passing on the tradition to his own sons.  He kept an age old tradition alive by singing for Hindu patrons on occasion like marriages or the birth of a child and for religious festivals.

Rana Khan belonged to the first generation of Manganiyar musicians who actually left their small villages to perform in bigger cities all over India and finally all over the word.

Today the Manganiyar musicians are known for their  highly developed voice culture almost classical in its rigour, together with an astonishingly rich repertoire of songs. Rana Khan is one of the legendary singers most memorized for his outstanding voice.

Despite his active concert schedule, Rana Khan dedicated a lot of his time to teach young talents of his community to preserve the ancient oral tradition. Ustad Rana Khan has been an inspiration for the young generation of Manganiyar musicians and remains always alive through their songs.