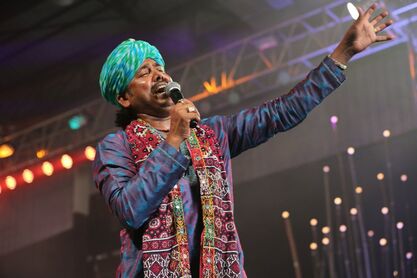 Mame Khan also known as the signature Folk voice of Rajasthan, has taken an ancient musical legacy from the golden Thar Desert to the screens of Bollywood and to more then 60+ countries, celebrating the finest of Folk Fusion with the 21th century audience. Known as an exceptional live performer, famed as a Bollywood playback singer, celebrated for his super hit on Coke Studio, awarded for his unique compositions and loved for his colorful persona - Mame Khan is The Folk Star of Rajasthan. From the most prestigious festivals to prominent TV formats & to be found across platforms on the world wide web, Rajasthan's Folk music earned global recognition through the voice of Mame Khan.

​​
Bio
Mame Khan belongs to a family of master singers, who perform a unique, oral tradition since more than fifteen generations. His energy and his vocal skill owe much to the influence of his father and tutor, late Shri Rana Khan.
Mame Khan’s musical career started in a small, almost medieval village named Satto near Jaisalmer. The golden city of Jaisalmer and its surrounding villages are famed for their rich history of kings and poets, and is a place where Muslim and Hindu mystical traditions come together -timeless and beyond borders.

Mame Khan is a name that finds special mention and great respect among the folk music circuits of Rajasthan. Today he sings a wide repertoire of traditional Folk- and Sufi songs. The special style of the Manganiyar Folk Music called Jangra includes a universe of songs for all occasions in life. From traditional wedding songs to welcome songs for a new born child; specially the happy occasions of life are accompanied by the strong and colorful songs of the Manganiyar Musicians.

Also the songs from Sufi poets of Sindh and Rajasthan, including Mira Bai, Kabir, Lal Shahbâz Qalandar, Bulleh Shah and Baba Ghulam Farid are sung by Mame Khan with élan and full of joy. His stage performances include the most illustrious national as well as international platforms. His voice has graced musical events and platforms in India and around the world: from Europe to America from Africa the Gulf Countries.
He also performed for Amit Trivedi’s episode on Coke Studio season 2 @ MTV, on “Chaudhary and “Badri Badaria". He is as well the main vocal of the famous Manganiyar Seduction by Roysten Abel. He made his first Bollywood playback singing for movies like “Luck By Chance” , “I am” , “No One Killed Jessica”,“Monsoon Mangoes”, “Mirziya” , and most recently “Sonchiriya”.​